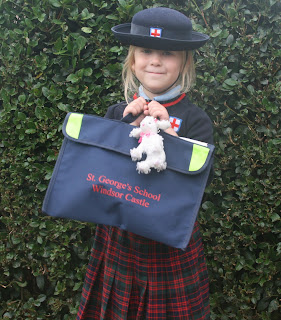 Year 1 is a big step up. The emphasis shifts (albeit gradually) from playing to learning. She thinks she's ready for it. I'm not so sure.

Sitting in the chapel for the third week in a row and I am in awe of my son and what he is doing.

I can hear a soft rumbling outside the Quire as the chapel enters the church and they assemble themselves.

The organ echoes off the ancient walls of this historic chapel. At my feet is the burial plot of King Henry VIII and Jane Seymour (his 3rd wife). I sit in ancient oak stalls with the brass plates of the Knights of the Garter behind my head. King Louis V is to my right. They represent the servants of the realm and the Queen’s most trusted advisors. I feel like I am part of this history. Or at least my son is.

He walks into the chapel with the other choristers towering above him. He is by far the smallest; perhaps the smallest chorister ever. They’ve even had to shorten his cassock so that it would fit him.

His cassock is a rich burgundy red. The colour suits him. He looks so grown up. Or maybe he looks little acting grown up.

He wears an uncharacteristic stoic look on his face until his eye catches mine and I see a slight smile in his eyes. Sometimes his mouth betrays him and he gives me a proper smile. But it doesn’t last long. He is all business. He knows this is important.

The voices of angels are heard every time these boys open their mouths. They soar to the roof tops and back. I get goose bumps every time I hear them sing and tears spring to my eyes as I burst with pride. Is this my child? How did he become this incredible person? And what was I doing when he became him?

Sebastian sings every word of the service. He sings in English. He sings in Latin. He concentrates and knows this is his duty. To God. To Country. To Queen.

He sneaks me a wry smile as he exits the Quire. He is full of himself and his accomplishment. He knows he has a lot to learn. His enthusiasm about music theory I find quite baffling. His dedication to his piano is admirable. He frustration with his violin his pitiable.

I won’t speak to him until tomorrow evening by which time his performance will be long forgotten in the memory of an 8 year old. But these moments I will never forget.
Posted by LaDawn at 8:16 am 4 comments:

My mom and dad never gave me the sex talk. Well, I think my mom probably thinks she gave me the sex talk but by the time she got round to it I think I had lost my virginity. I must have been about 17. And my dad, well, let's just say I think my father imagines both of my children were conceived via immaculate conception. I should have been named Mary.

I went to Catholic school and let's just say they teach sex education the way they teach the theory of evolution. They don't.

I was annoyed, nay outraged, when I read my Oprah magazine a few months back to find that they had dedicated the entire issue to talking to your daughters about sex. Hey, what happened to our sons? Isn't it just as important to talk to our sons about their roles and responsibilities? Doesn't so much that happen to our daughters around sex happen because of the boys and what they've been taught (or not)?

But let's not get ahead of ourselves. I'm still at the basics. Stuck there really. I don't have a clue on how to approach this with either of my children. And Seb is definitely at the age where he needs to have a talk.

I've read the general advice: Make sure the vocabulary is accurate but also age appropriate. This could be a contradiction. My husband doesn't even use what I would consider to be accurate terminology. Or age appropriate for that matter. And who's to say what is age appropriate. My daughter is far more mature at 5 than her brother is at 8 about some things.

I attempted the talk one time when I was out having lunch with him. Just me and him bonding. Over pizza. Jump right in.

I asked him if he wanted to know anything about sex. He didn't miss a beat and replied it was just about a whole lot of kissing and he wasn't all that interested. Right then. Job done.

Just kidding. I knew my job was far from over.

My sister's advice was simple and straightforward. Tell them all. Tell them everything. Tell them now. She assures me this is the approach she's taken with her daughter and that it has worked a treat. I reckon she does this just so they get so overwhelmed they never broach the subject with her again. And I'll bet her daughter's extensive vocabulary makes her very popular at school. Now I'm thinking she might have something here.

You see, I was racing through the drugstore the other day. I was buying Seb a new hair brush and comb, a new toothbrush and some toothpaste, some shampoo, all for boarding school. Oh and I just need to grab me some of these. What's those, mum? Um, just things for mummy when she bleeds.

We join the queue.

So, mummy, why do women bleed?

I gasp. The lady in front of us whips her head around, looks at Sebastian, then at me and cracks me one of those "whatcha gonna say to that?" smiles.

My pulse quickens and my palms sweat. OK, I can handle this. Just the facts mam.....

Women bleed so they can have babies.

Here's me thinking I've managed that one. But nooooooo. it was never going to be that easy.

What does bleeding have to do with havin' babies, mum?

At this point the whole queue is snickering. Loudly. Indiscreetly. I take a deep deep breath. I bend down to his level and smack him. Not really.

I calmly explain to my son in a soft, gentle, supportive voice at his level that this is one of those private subjects that I am happy to explain to him in excruciating detail in private, when we are alone, say in the car. And the radio is turned up.

So we carry on with our errands and an hour or so later return to the car. I have bought him a book on astronomy hoping the distraction factor would be sufficient to keep his attention. I crank up the radio just as soon as I start the car up. We exit the parking garage singing loudly and there I am feeling smug with myself in the hopes that he has forgotten all about it.

I turn right on the road and feel myself coasting home when he leans forward, turns off the radio, and says, ok, so explain, the whole bleeding baby thing.

Heaven help me. I nearly drove the car off the bridge and into the rushing river.

So I gave him the facts. Very basic. Nothing about the seeds and daddy's role. Nothing about loving relationships or healthy expressions of your needs and desires. Or the anatomy.

So I ask you my beloved readers: you gotta help me out here. Anyone got a script I can read from. I just don't think my "when you bleed you're not having a baby and when you don't you are" will put him off for much longer.

And be quick about it. I'm on the verge of a nervous breakdown here.
Posted by LaDawn at 6:25 am 5 comments:

Posted by LaDawn at 6:24 am No comments:

Anyone who knows me knows that I love autumn. I love the harvest of crops and the crisp sound of leaves crunching under foot. I love the nip in the air and the anticipation of the first fire in the fireplace. I love imagining that snow fall is just around the corner (although now that I live in England this isn't necessarily true anymore. I love back to school and buying school supplies (although I could do without sewing on countless name tages, thank you very much).
Our harvest this year was a bumper one. The foxes and rabbits got to my pumpkins, squash and courgette (zucchini) just after they flowered so I will need to make alternative arrangements for next year but the tomatoes, pepper, chillies and corn were amazing. And the beans were planted way to late but I'll now have sufficient ammunition to nag my husband with next year.
I loved watching the children pick the veg and husk the corn and boil it and eat it. Mmmmmm, good! Freezer now stocked! Bring on the winter....
Posted by LaDawn at 6:03 am No comments:

That wasn't the plan 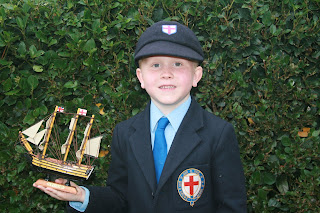 Tonight we were planning on taking Sebastian's boarding gear to the school. That means we put his pillow case and duvet cover on his bed and unpack the clothes that he will keep at the school during the week.
I kept myself together all day by telling myself that even though we were doing this he wasn't actually going to be staying overnight tonight so everything would be just fine.
Well, man plans and god laughs.
We arrived at the school and there was a buzz in the air. Only the probationary choristers were being allowed to go home tonight and come back in the morning. And one new boy was going to be staying since his family lives miles away. He was going to be all on his own in the dorm. And of course my son just quite simply wouldn't put up with that.
When I offered him the chance to stay he jumped at it.
So now I have come home one child lighter. And that wasn't the plan. There was so much I wanted to tell him tonight. I wanted to cuddle him and hold him close. Oh heavens......I hope I've done the right thing. Could someone bring me a gin and tonic?
Posted by LaDawn at 7:53 pm No comments:

One of my favourite beaches in the UK is Porthcothan Bay down in North Cornwall. It isn't ever crowded and as the tide comes in and out the beach changes dramatically, exposing pool to explore and a river down the middle to ride a boogie board.

We've been to this beach before and we shall return. Let's just hope that next time the sun decides to make the journey with us. out of 7 days camping we had only 2 days of sunshine and only 2 half days of no rain. The rest of the time it completely tipped it down. Not to worry though: we had the Bentley of all tents. Our Outwell Vermont XL held up very well. In fact it was more comfortable than some caravans we've stayed in. Right up until we had to cook in the driving rain.

never mind. We made s'mores and drank hot chocolates and grilled lobsters and crabs and fresh mackerel (caught by our camping neighbours). We covered ourselves in our waterproof trousers and rain coats and pulled on our wellies and just ignored the wet weather.
Posted by LaDawn at 7:03 am 1 comment: