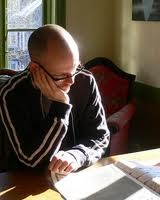 I am taking part in a fantastically fun social phenomenon called "Social Reading".  Our social reading experience is led by the indomitable Scott Pack, the voice behind the blog, Me and My Big Mouth, the brains behind The Friday Project, the power behind the Bookswap, and the man behind the creative genius of Rhian Winsalde (his wife).
Social Reading is like a book group only better.  Individuals from anywhere all read the same book at roughly the same pace and use twitter and other social media, like Scott's blog, to discuss and comment.  This is the first time I have participated.

The book was chosen via a very scientific method of online voting.  Anyone could nominate any book, although it appears that the best books are those great big books that are just too scary to take on alone.  This time The Quincunx by Charles Palliser has been chosen.
This book weighs in at 1221 pages if you include the author's afterword and the incredibly lengthy list of characters.  I would normally feel daunted by this task but because I am undertaking it with the help of countless strangers I feel somewhat reassured.
This weekend's task was to read Book I of 75 pages.  The first chapter, a battle between Law and Equity, took my breath away and sucked me right in.  I struggled to find the motivation to do anything other than read.  I wondered if the children could just feed themselves toast all day but realised this was too big of an ask when they told me the bread was moldy.  I sat up in bed until the wee hours of this morning and must confess to moving on to Book II where once again the first chapter (Chapter 7), a discussion between Wealth, Power and Arrogance, sucked me into the vortex again.  Now the 1221 pages don't look like such a big task at all.
It's not too late to join us.  Although there has been a run on books at Amazon, if you can find a copy, join us.  You may follow the discussion on twitter using the hashtag #Quincunx and/or Scott's blog.  If you can't follow along this time, the hashtag #SocialReading will keep you informed of future undertakings.
In the meantime, I've got a book to read.
Posted by LaDawn at 9:54 am No comments: 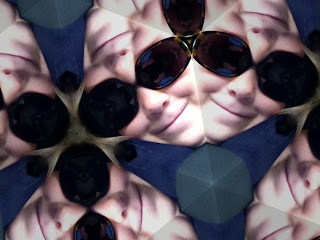 Now I know lots of famous people have dyslexia (and probably dyscalculia) and lots of not famous people are afflicted as well.  But that doesn't help my daughter.

It might seem late for us to realise that she has dyslexia.  In fact, way back when Abigail was in Reception, age 4, I had my suspicions.  By age 5, I knew.  But the eductional professionals insisted that it was way too early to tell.  So we waited. Last year, we had a preliminary confirmation of the dyslexia but the degree of the impairment was unknown.

In the middle of last year, Abigail had been seeing an Addiontal Education Needs teacher and was getting loads of support from the school.  We saw a massive improvement in her reading ability and small gains in her maths.  But let me put this in perspective for you.

Where Abigail could not read at all at the beginning of last year, she was able to sound out 3, 4, and some 5 letter words.  But quite often she guessed and she got it wrong.  Reading took a long time. She was frustrated because there is no one on this planet who tries harder than Abigail.

Then it started to impact everything else.

So we called in a professional.

Dyslexia is a language processing neurological abnormality.  Her brain can't process language, either when you are speaking to her, partiuclarly quickly, or reading, or writing.  Even when she is trying to speak to others, she struggles with getting the words out of her mouth.

Then the panic and anxiety sets in.  She becomes tense and hostile.  Then she becomes frustrated.  Then she becomes distraught.  Finally, she begins to think she is stupid and dumb.  When, in fact, she is neither.  She is incredibly bright and clever and funny and friendly and polite and wonderful in so many ways.

Just not the way school requires her to be.  As I parent, there is nothing worse than watching your child go through this.

Dsycalculia is the same processing abnormality except that it applies to all mathematical concepts.  So for example, she has no idea what adding 4 and 1 together should be.  She has to use a number grid and count everything out.

Sure there are worse things in life.  She doesn't have cancer.  She can walk.  She isn't going to die in the foreseeable future.

But that doesn't mean that my heart isn't breaking in a million pieces as I try to process this and plan what to do about her future as she may need a specialist school.

The diagnosis does go a long way to explaining some characteristics we've noticed.  Abigail enjoys playing with younger children.  They speak more slowly and more simply.  She can process that.  Abigail has a wild and wooly imagination.  She can get  lost in the world inside her head for hours.  She often gets "carried away", as she says.  I call it distraction.

So, I have dealt with this the only way I know how.  I am researching on the internet.  I am in contact with various support organisations.  I have ordered and have already begun to read stacks of books.  I've bought countless apps for her iPad.  We will have a plan.  I don't know what that plan is yet.  But we will get there.

But first I must figure out a way to explain this all to Abigail.  And, for me, this is proving the most difficult.  She knows she struggles.  But I can't quite get my head around what and how to tell her.

In the meantime, if anyone has any sage advice, I am open and willing to listen to any and all experiences.
Posted by LaDawn at 9:19 am 2 comments:

Secrets of the Tides by Hannah Richell

Again, I have posted my review of this book on newbooksmag.

This book didn't really warrant me to say much more although I have to say, my opinion is in the minority.  It did win the Richard and Judy Book of the Year Award afterall.

I do believe that this would be a great read for a book group.  The character development, each character's grief and guilt, as well as the setting against the ebbing and flowing of the tide against the Dorset coastline provide just a few of the topics that could be discussed.

For me, however, I am on to bigger and, hopefully, better things!
Posted by LaDawn at 9:48 am No comments:

The Submission by Amy Waldman

I wrote a review of this book for newbooksmag which you can read here.

I was limited to 150-200 words which I found quite difficult.  My first draft of the review was over 900 words so I set to editing, which is not something I tend to be very good at.

After re-reading what I have written there, I feel that my recommendation of this book doesn't come across strongly enough.  So I've decided to urge you, my blog audience, to go have a read of this book.

Even now, weeks after I have finished it, I find myself haunted by the theme and the, in particular, the ending.  What does it mean?  I don't want to spoil it and give it away so I will wait patiently for at least one of you to get the book, devour it, and then let me know what they think the ending means.

You will be moved.  I promise.

PS  If you are a member of a book group, this would make a fabulous choice.  There is so much to discuss!
Posted by LaDawn at 11:29 am No comments: