And make sure you watch this all the way to the end!

Posted by LaDawn at 6:14 am No comments:

The Ghost by Robert Harris

I've never read a book by John le Carre. Despite my effusive praise for the Baldacci novels, I'm just not all that into guy spy novels. and I've always firmly put Robert Harris into that category. I read his book Fatherland which is about the alternate reality of what might have been if Hitler had won the war. Joseph Kennedy, the father of JFK, is president and we all speak German. This book seriously freaked me out.

When the local book store held a signing with Robert Harris I gave it a miss.

But then someone I know told me that Harris felt this was his favourite novel of all the ones he'd written. And that she loved it. I trust her recommendations so I decided to give it a go.

The Ghost is about a writer who writes autobiographies for intellectually challenged sports stars and celebrities trying to wring the last out of the shine out of their star and into their bank account. These ghost writers are considered to be much more intelligent than their subjects and are considered to be the laughing stock of the literary world.

So it's a bit of a surprise when The Ghost is hired to finish writing the autobiography of Adam Lang after the original writer, Mike McAra, allegedly commits suicide. Lang is the politician of his time and as his influence fades he is desperate to tell his story but he's more style than substance. And the draft McAra has left behind is a disaster, so badly written that the only option is to start over.

I loaned this book to my mother when she needed something to replace her Baldacci debacle. She took it to France and never put it down. We had to pry it out of her fingers when we went to Disneyland. I'm afraid I had much the same reaction. Luckily, it's not long or verbose so I managed it in just 2 days.

The book does take so many twists and turns that I lost my way a couple of times and had to go back a few pages....I even reread an entire chapter. And just when you think it's all over and the mystery is revealed the ending wallops you up side the end and you realise you didn't have anything figured out. Genius!
Posted by LaDawn at 6:48 am 2 comments:

In September Sebastian will begin as a probationary chorister. This is a huge honour and something that he wanted to do. I wasn't so keen on the idea but when your child wants an opportunity to be a part of something bigger than himself, you kinda don't want to get in the way.

Yes, that might mean your very own sacrifices but this isn't about me. It's about him. He is going to be performing with one of the world's greatest boy's choirs in the world. The training he will receive will benefit him for the rest of his life. And he wanted to do it. I've never seen him so determined as I did before his audition.

But the step towards Year4, and choristing, and boarding all at once seemed a step too far. Seb is like me and doesn't like change. So we decided to break it up into bite size chunks. He'll do a night of boarding every week for the remainder of the year and then next year when he goes to 2 times (Tuesday and Thursday) every week it won't be such a shock for everyone involved.

The boarding school is great fun for the boys. They have a big flat screen TV. They have a Play Station, a Wii, an xBox. They have gap students who's sole purpose in life is to entertain them. They have each other. They have a chef in the dining hall who cooks them amazing dinners and a hot breakfast every day. They have supervised prep to help them with their homework. they have tennis courts and a swimming pool and cricket grounds. Quite frankly, it's a bit better than home.

Except we're not there.

Abigail misses her brother when he is away. The first morning she was in a state and didn't quite know what to do with herself. The next week she wasn't quite so bad. And she has announced that starting in Year3 she wants to board.

From the day a child is conceived everything you do, every decision you make, every guidance you give moves you closer to that place where that child ceases to be a child, ceases to be reliant on you and moves out into the big world. Show me the child at 7 and I'll show you the man. We've done a great job raising him and our job isn't finished.

For now, he's merely having a sleepover once every week! Stop worrying.....
Posted by LaDawn at 7:41 am 1 comment:

Or is it Frankie and Stinky? It should be.

I was filled with hope as this book started. Set in South Africa, the story begins in the 1950s as two sisters, Dinah & Lisa navigate the turbulent world of adolescence and apartheid.

My hope soon gave way to dismay as the sheer volume of minutia deadens the flow of the story or perhaps more accurately stops the story altogether. My dismay turned to disgust when 2/3 of the way through the novel I realised that there was unequivocally and absolutely no plot.

It was as if the author had found some young girls diaries and put them together with all the mundane observations and called it a book. The details are exquisite and evokes the era with perfection but the girls just meander through life and despite the fact that they are living in this extraordinary time, they are wholly unaffected.

I have to confess I did not finish the book. I abandoned my efforts about 3/4 of the way through and decided to move on. Maybe the ending is amazing. But I wasn't going to waste another minute of my life to find out.

Book Group Verdict: One woman loved it. Not so much any one else. But we had a 40th birthday to celebrate so who could be bothered to talk about a book that was such a waste of time.
Posted by LaDawn at 7:38 pm 1 comment:

My mother picked this up after reading my reviews of his previous novels Split Second and The Camel Club. She tried to read it on the plane but abandoned it and left it here for me saying she just couldn't get into it.

She must be nuts. Or maybe you just need to read the other two novels first. The characters are nearly all recurring throughout the plots and subtleties of characterisation and story line might be lost if you don't know what has come before.

Divine Justice saw the return of my favourite Baldacci character, Oliver Stone, and the plot is just as improbable as his name is real. I'm not a conspriracy theorist and I hope to heaven that the governments of the free world really aren't this corrupt and conniving. But the story twists and turns like a Mach 10 rollercoaster ride and I just never know where the story is going to take me. Just hang on and enjoy the ride.
Posted by LaDawn at 3:47 pm No comments:

You would think that a mother would send her beloved son off on his very first boarding experience supremely prepared for all that may come his way.

But this mother forgot the most important piece of equipment a little 7 year old boy needs when away from his mother at boarding school: his teddy bear, Chloe.

And he was missing Chloe more than ever at 3 am and mummy wasn't there to wipe away the tears and tuck him back into bed. Oh, please tell me I haven't just made the biggest mistake of my life.
Posted by LaDawn at 6:29 pm 2 comments: 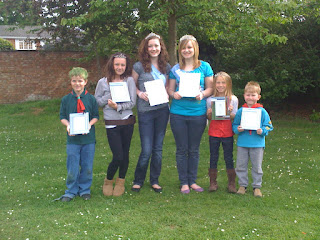 Saturday was the May Fair which is a fundraiser for the local Scouts and Girl Guide organisation. The May Fair is also the occasion to pick the attendants for the Carnival Fair. There is a Queen, a princess, 2 young attendants and 2 sprites (a nod to equal opportunity for the boys).

Last year Sebastian gave it a go and didn't make the grade (although we are never quite sure what they are looking for but it doesn't matter because it is just a bit of fun). This year he gave it another go and I am proud to announce that he will be one of two sprites in our Carnival.

If you live local come out and support this fantastically old fashioned and incredibly fun filled weekend - June 5-7!
Posted by LaDawn at 7:31 am 4 comments: