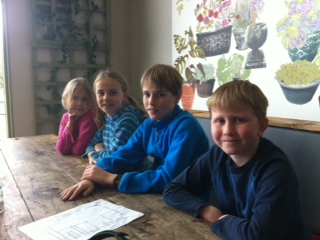 The morning dawned bright and beautiful.  That's right, people.  The sun was shining.  The sky was blue.  The birds were singing.  The cows were mooing.  OK, you get the idea....

A whole morning in front of us.  Oh, what to do, what to do.....
In our optimistic haze we decided we could obviously hike the length of the Devon coast, or at least from Hallsands to Start Point to see the lighthouse.  First thing in the morning 5 miles round trip sounds like a great idea.
Which it probably is for someone who isn't several stone overweight and seriously out of shape with 4 children and 3 dogs in the hiking party.  And, who designed these walks?  Must the entire way there be uphill?  I mean 2.5 miles uphill.  Seriously?

If I had thought about it a bit more clearly (which would have required several more cups of coffee than I managed), I would have been able to deduce that a lighthouse is going to be on high ground and therefore, this walk would require substantial vertical effort.

The men and youngens set off like this hike was a race for life.  I was happy to let them surge ahead.  In the first 10 minutes I thought I was going to burst a lung.  And why exactly was I carrying my cold weather coat which weighs a not insubstantial amount but wasn't waterproof enough yesterday to keep me dry and yet was heavy enough today to slow me down?  There was that temptation to abandon everything I was carrying.  Instead I was grateful I opted to let Marc carry the camera.

My friend, M, used to be a competitive runner.  In fact, one of the parts of yesterday's story that I just couldn't bear to include was that she ran all the way to Beesands yesterday and back in the rain with the three dogs, just to do some reconnaissance work for us. She did this before I managed to get dressed.  But today she slowed it down and we had a girlie bonding chat while she encouraged me to keep on putting one step in front of the other in her ever so gentle way.  She never once complained when I stopped to catch my breath, even if I had just done that 3 minutes ago.

A profound sense of achievement overwhelmed me in a very private way when we arrived at the lighthouse and I was reunited with the other part of our travelling gang.  Of course by that time, they had taken off up the side of the mountain to check out even higher ground (because of course, there is always higher ground).

I told them I would meet them on the way back.  I looked out over the sea.  I could hear the children yell and giggle over my shoulder.  I soaked up the sun, congratulated myself on meeting today's objective and did I what I do best:  watched the tide go out knowing that later tonight it would come in.

See, I've learnt that recently.  No matter what happens, the tide is sure to come in and then it will go out.  Tomorrow it will do the same even if I don't watch.  The sun will rise and the sun will set even if it is raining.  The stars will shine even when it is cloudy.  Joy and happiness is inside of me and all around me even if I can't feel or find it right now.  There is absolutely no use looking anywhere else for it.  Right now, I am seeing it and feeling it all in Devon.

After our athletic endeavours, we stuffed our faces and headed to Slapton Beach for a bit of stone skipping, kite flying, castle building, and fishing.  None of them were widely successful.  In fact, none of them were successful at all.  Nobody seemed to mind.

Once back at the cottage and properly fortified with hot cross buns with lashings of butter and sugary hot tea, the girls decided to try their hand at a bit of artistry; they painted a couple beautiful landscapes with our watercolours and then Abigail wrote a song begging for the sun to keep shining all week.  The words are done and as I write the boys are working on writing the tune on the piano.  I have to admit to being impressed by the effortless joy and happiness emanating from every pore of these children.  It lightens my load and smooths more than a few wrinkles.

I anticipate tomorrow morning will bring more than a few aches and pains as I pay for my ambitious trek today.  Stay tuned to learn if I am able to walk........


PS The end of yesterday's story (http://clare-panton.blogspot.co.uk/2012/04/stopped-wind.html) was inadvertently omitted.  OK, not entirely true.  In my rush to share the magic with you I forgot to finish the fishmonger story.  Just in case it was keeping you awake, I thought I should let you know that the fish was indeed freshly caught that morning.  I know this because when we went back to pick up our shopping all of the fish was sold out and when I asked he told me I would have to wait for tomorrow's catch.  When I asked what he would have, he looked at me like I was some crazy, city girl and told me every morning was a surprise.
Posted by LaDawn at 8:05 am 2 comments: 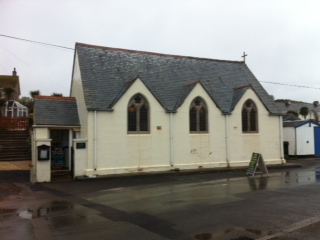 We are on holiday in Devon (southwest coast of England) with another chorister family of four and their 2 dogs.  We've been planning this trip since June last year and had hoped for that lovely springtime weather promised by the south of England during the Easter school holidays.

We plan.  God laughs!
We had a late arrival night followed by a late dinner followed by late night bottles of wine which meant ultimately it was a late start to the morning.  The heavens opened up in the morning and the gale force winds made it a wee bit difficult to stand up.  But we had set our minds on a walk along the coast and we were going on a walk, dammit!

OK, I surrendered the moment I stepped out the door.  Abigail supported my surrender and joined me in the comfort of our car as the others set of for a bracing walk to Beesands about 2 miles away.  We would meet them there.

The roads are single track surrounded by 10 foot high hedges are both sides and grass growing down the middle of the road.  Abigail announced she felt like Alice in Wonderland.  She was Alice.  I was the White Rabbit what with my obsession for punctuality and all.

Thanks to the wonders of sat nav we made it without a single wrong turn and whilst enjoying the scenery.  What did we do before this wonderful invention?  Oh, I remember:  bury our heads in maps and be lost for hours until asking for directions.  Even then a local accent would lead to a nod and a smile but no closer to finding our way.

The initial drive by survey of the tiny seaside village took all of about 30 seconds.  We got parked up  across from the designated pub and I wondered what Abigail and I were going to do for the next hour whilst we waited for the others to survive the walk.  There wasn't even a newsagent.
We spotted the car from the other family.  M had decided that one car wouldn't be enough for all of us to return home after lunch so she would hang with us.  With reasonably low expectations, we headed to the local fish shop.  And then the magic started.....

The fishmonger greeted us with a hearty hello.  It was a small shop but there was ample fish which we were assured had been caught that day.  Yeah, yeah I thought "they always say that".  We found the tea bags and instant coffee we were after and then found some homemade hot cross buns, which clearly we were not going to pass on.  We headed to the counter only to be further tempted by the pronouncement that the fishmonger had just whipped up a large pot of crab chowder which would be ready in about 2 hours.  As it was only 11 o'clock we decided, to postpone our purchases and return after lunch.

Back out in the wet weather,we headed.  A sign outside a small church enticed us inside with the promise of hot tea and cakes, the price being only a donation to the church maintenance fund.  We were greeted by 3 very enthusiastic women including the village vicar.  They prepared 2 of the best cups of tea I've ever had and a delish hot chocolate for Abigail.  We bought some cakes for after the walk back at our cottage and then sat down for a right proper natter.

M went to book the pub for lunch and returned with some bad news:  the pub was fully booked until 2:30.  Plan B went into action.  We would wait for the walkers, eat cake for lunch, then go for our pub lunch.  The church was happy for us to wait.

The walkers arrived soaking wet and chilled to the bone.  We got them warmed up with hot drinks and gorgeous homemade lemon drizzle cake.  As if by magic the boys gained a second wind and a piano was magically produced from a tiny little corner.

W sat down and started to play for the walkers in the church.  Then Seb played.  Then W played.  the girls sat decorating cupcakes and colouring.  Each and every person who walked into that church for a refuge from the wind and storm found a place filled with warmth and love.

The church emptied and the men headed for the pub when our little choristers decided to deliver a most beautiful gift.  Despite it being Easter Monday, they began to sing Once in Royal David's City.  Even though it is traditionally a Christmas carol, it seemed right and appropriate.  Their voices blended beautifully.  They were pitch perfect.  They sang without accompaniment and hit every high note.

When they finished, everything was silent.  You couldn't even hear the wind howling.  They had stopped the wind.  It was as if everything had stopped to listen to them.  And then the little boys' sister broke into applause and I wiped away the tear from the corner of my eye.  The rain on the windows invaded our space and the boys smiled shyly like 10 year olds do.

We thanked the church ladies of St Andrew's Church of England in Beesands, Devon for their gracious welcome. We made a generous donation to ensure that this haven of warmth and kindness is here for future generations to seek comfort.

The afternoon had not gone according to plan but the day had far exceeded our expectations.  Who would have thought we could stop the wind?
Posted by LaDawn at 10:12 am 3 comments: