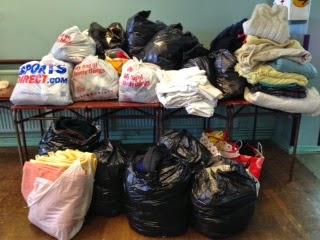 The earthquake in Nepal has hit me hard.  I can't watch the television or read the newspapers without ending up in floods of tears.  I feel so utterly helpless.

These people have so little and we have so much and then the earth literally moves under their feet and what little they have is taken away from them.  They have lost their friends, families, homes, jobs, everything in just a few minutes.  They are sleeping in the open.  They are living in constant fear and they are grieving.

Charities race into action.  My television, my email, my phone is flooded for requests for donations.  They all want money.  Money. Money. Money.  I get told that it is easier and cheaper to source goods locally than to transport second hand goods.  I get told they don't have warehouses and sorting centres.  I get told it's too hard for them to take goods to disaster zones.  I'm told to donate the goods to the local charity shop who will sell them for MONEY.  I'm told that transportation costs are too high (and yet flights are still arriving in Nepal).

I find this disgusting for so many reasons.

Yesterday I collected bag after bag of badly needed supplies to help the people in Nepal in just a few hours.  People like me who didn't have money to give, or maybe had already given money as well, took it upon themselves to give their belongings.  We received things badly needed in Nepal like sleeping bags, tents, blankets, coats, shoes, hats, scarves, children's clothing, kitchen utensils, dry food.  I was so touched by people's generosity that I found myself on the verge of tears all day.

We have another collection scheduled for today.  But now I'm not sure what I am going to do with the goods.

Originally, these goods were destined for a British Army collection in Aldershot but the outpouring of generosity meant that these containers filled up very quickly and by mid morning they were full.

My car is full of these goods because as of this morning I have no where to take them.  The British Red Cross initially agreed to the transportation and distribution of the goods.  What they were really agreeing to was for me to drop these things off at one of their shops so they could resell it.

I've spoken to DEC only to find that all they want is MONEY.

Global Hands can't help me because I'm not an official organisation.

Age UK, Oxfam, British Red Cross, and the lot only want my goods for resale in their charity shops.

I am trying to contact the Ghurka division of the British Army to see if they are interested.

NEWS BULLETIN:  No one in the UK needs a second hand wooden spoon.  Thousands in Nepal need wooden spoons to stir their meagre rice being cooked over an open flame in the outdoor in a crowded tent camp.

I have been in contact with the Nepal Youth Foundation who help thousands of children in Nepal.  They are desperate for our goods.

But I need your help.  If anyone out there knows how we can get these items to Nepal, please contact me urgently.
Posted by LaDawn at 11:58 am 5 comments:

Me versus the Depression

When I was first diagnosed I wanted to know when I would get better, how long is the recovery period?  Like when I broke my ankle, I knew I would be in a cast for 3 weeks, then physio for 6 weeks and then I would be almost good as new.  For the most part, this was true, give or take a few weeks.

With depression, there is no defined recovery period.  I have seen people bounce back after a 3 month dose of citrolapram and never look back.  I've seen people who have fought all their lives against this insidious illness.

In the early days, my psychiatrist assured me I would get better.  I asked him how long that would take.  He said something vague like "a while".  When I pressed him for something more concrete, he was unable to provide any time frames.  At the time I thought he must not be very good at his job.  But now I can see that there really isn't any way to predict recovery.

The effectiveness of medication changes over time.  The effectiveness of therapy is wildly variable.  What happens in life is outside a clinical study and therefore cannot be factored into a recovery timetable.  In other words, you just have to ride it out and have faith that eventually you will get better.

But if you think that getting better means going back to the same person you were before you were ill, you are in for a big surprise.  You never come out of depression the same person you were going in.  Many of the behaviours and thoughts you had before were the very things making you ill.  It's like drinking poison, recovering, and expecting to stay better but going back to drinking the poison.

Everyone comes out of depression fundamentally different than when they went in.  Same as when cancer survivors come through but their lives are fundamentally changed thereafter.

Here are some of the things that have helped me recover to the point where I am today:
I am certain my journey has not ended.  The shower (& bath) proves to be an ongoing nemesis.  I find contentment when once in I'm there but getting there is a major struggle every day. So I've changed what it means to be ready to face they day.  That may or may not include, as is more often the case, a clean and fresh smelling me.  My tribe loves me regardless.  Social situations are challenging but I am taking them one at a time and engaging more often than not these days.

But the proof is in the results.
Near as I can tell I am winning, 1-0.

Posted by LaDawn at 8:09 am No comments: