On October 12, 2011, at 1:30 am my Aunt Helen lost her battle with brain cancer having fought valiant battle.

Aunt Helen represents a time in my life when everything was good and nothing could ever go wrong.  Adults were perfect up on their pedestals and children had no other purpose than to create mischief and keep their parents on their toes.  My mother and father were still married.  My aunts were are still married to my uncles.  Family dinners at my Grandmothers house were raucous chaotic events filled with love and laughter and usually a fair bit too much to drink (for the adults).  The tribe of 10 cousins encouraged each other to climb higher into the trees and set various things on fire.  Christmas Eve was magical and I wish so hard to be able to freeze that time and for none of it to ever change.

But the world kept spinning and it all spun out of control and nothing was ever the same again.  By the time I was 12 my parents had divorced.  Shortly, thereafter, Aunt Helen and Uncle Ed divorced. Uncle Bob and Aunt Sandy remained married but moved miles away.

Family gatherings became fraught with the tension of custody battle and alimony payments and we were never ever all together again.  The tribe of cousins flew out into the chaos of the world and went on to create some of our own chaos in other places.  We've struggled with addictions, broken marriages, custody battles and demons.  Every one of us has our own children.  But that time of childish abandoned joy ceased a long time ago.

I haven't spoken to Aunt Helen for years and years.  We had a bit of a falling out when I was in university which makes my grief somehow hollow and shameful.  I've seen her across rooms at matches (weddings), hatches (christenings) and dispatches (funerals) but more than a mere nod and smile little passed between us.  I wish I could have told her that she represented all that was good in my childhood and that she made the best chile con carne in the world!  Her laughter will be missed. 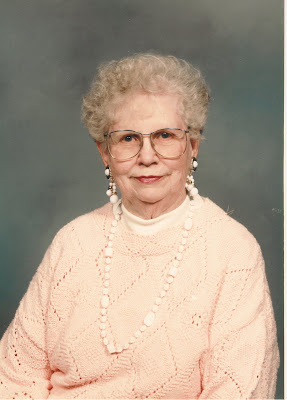 Today would have been her 90th birthday.  I have been without her compassionate wisdom and gentle guiding light for 6 years.  I miss her everyday and every year I stumble today.
Posted by LaDawn at 8:12 am 3 comments: