Unexpected Outpouring of Generosity for Nepal

It all started with a simple idea.  Instead of a whole bunch of people driving to Aldershot, I would combine efforts and collect a few things from local people who had things to donate and drive it all to the Army base for Ghurkas.  It would save time and petrol.  And it meant I could finally do a little something for the people of Nepal who had lost everything in the horrible earthquake that hit last week.  It was only a small gesture.

After arranging to use our local village hall in Old Windsor as a drop off point and enlisting the help of a fellow resident, we discovered that the containers going to Nepal from Aldershot were already full.  I had committed to people that their donations would go to Nepal so I needed to make sure that happened.  But how?

In a Twitter storm, I initially received a vague commitment from the British Red Cross that they would take our donations.  It later transpired that what they meant was they would take our donations and sell them in their shops for cash.  I was unhappy with that arrangement as many of our items would be unsuitable for resale in the UK as they had been specifically chosen with the survivors of the disaster in mind.

Having filled my car with the donations from that day and due to demand, we secured the hall for a further drop off slot for the following evening. I spent the night looking for an organisation that would sort and ship the goods for us.  Purely by chance, Twitter came to my rescue.

I spotted a tweet by the Leader of the Royal Borough of Greenwich, Councillor Denis Hyland,
@CllrDHyland.  The tweet was a photograph of a flyer attached to a lamp post indicating that goods donations being taken at Eltham Leisure Centre and Woolwich Town Hall would be shipped to Nepal supporting the local Nepalese community.  Greenwich apparently has the largest Nepalese community in Great Britain.  The next morning I set off to Eltham.

The Leisure Centre was shocked by the quantity of goods we donated.  I indicated that I would be returning the next day with the same again.  I returned to Old Windsor just in time to open the doors of our village hall for the next donations. 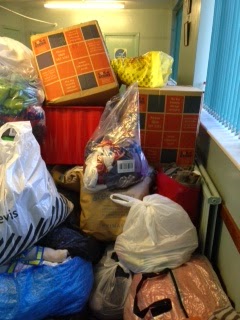 As we neared the end of the three hour collection window, it became abundantly clear that I wouldn't fit it all in my car since it was already full.  We had run out of room in the hall.  We had filled my car and people were leaving bags just outside the door. 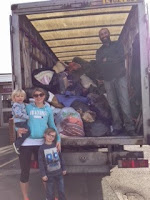 Once again the power of social media swung into action.  With more than a little from from my friends, we secured a small truck courtesy of Frontline Logistics, to meet me and a few others at the hall at 8 am on Friday morning.  We loaded the truck FULL and headed off towards Eltham.

Mid journey I received a tweet from a member of the Nepalese community asking if we would deliver to Woolwich Town Hall as the sorting and packing centre was located there.  We modified our destination and continued round the M25.

Arriving at just after 10 am, we were greeted at the door by a member of the borough.  With the help of the countless volunteers, we set to unloading the truck.  I was shown to the sorting room where a large number of Ghurka widows were sorting items and boxing it up.  It was an incredible operation.  Every box had to be labelled with contents itemised and weighed.  The room was full of goods and volunteers.  What initially looked like chaos was, upon careful inspection, a fine oiled machine. 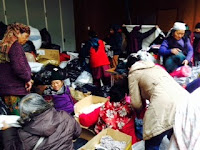 I hand delivered a bag of baby shoes that one woman had handed to me saying that they were her children's baby shoes and had been kept carefully preserved in her loft all these years.  She was donating them because the children of Nepal needed those shoes more than she needed those memories.

I also hand delivered a lovely 100% wool blanket that must have cost a fortune.  It was given to me by a woman who told me it was her mother's who had passed away.  She could still smell the scent of her mother on the blanket.  Again, she felt the people of Nepal needed that blanket more than she did.

I wept at every story. 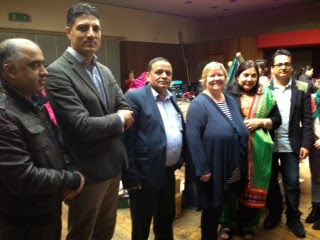 I was introduced to the leaders of the Nepal community and they were touched by these stories. They were overcome with gratitude at the volume of goods we had come so far to deliver.

I was lucky to meet these leaders.  Notably, I met Sonia and Fatta Thappa, who run Skills and Care, a dynamic, community-led, Nepalese social enterprise organisation.  Fatta was the individual I was exchanging tweets with.  I also met Sushila Karki of Nepalese Nurses, who have already sent doctors, nurses, and goods to Nepal and were planning to send more over the next few days.

I was satisfied that our community's donations would make it to the survivors of the earthquake.  On Saturday, 2 May, 500 kg was shipped and 1600 kg will be shipped tomorrow, 5 May.

Our job is not done.  Due to our overwhelming response, funds are needed to pay the cargo.  You can help our goods get to Nepal by donating HERE.

I would like to personally thank Sarah Wants who helped me collect goods at the hall both days, even on the day of her son's 6th birthday and helped load the truck.  Also, a big thanks to Chris at Frontline Logistics who donated the use of his truck and Fiaz who did the driving and loading/unloading at both ends.  Also, thank you to the Old Windsor Memorial Hall who donated the use of the village hall and committee room on both days.

And lastly a big thank you to all of you who responded by opening your hearts and giving.
Posted by LaDawn at 11:21 am 2 comments: