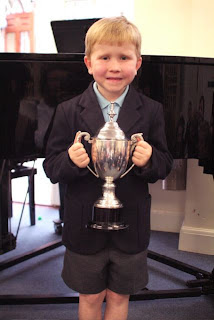 I am so proud of him. I wanted to hoot and hollar. I had to remind myself that I was in a most sacred Chapel. And Marc missed the whole thing!
Posted by LaDawn at 10:34 pm

Marc's loss indeed...Congrats Seb I am truly proud.. All my Love Grandma

Kudos to Seb, and congrats to his parents.

What a great honor, Sebastian, keep up the good work! Love from Aunt Clare & Uncle Michael

dont know if you remeber me but i would have to give seb a high-5 but...well im on the internet sooo
online-five! really awesome job seb!