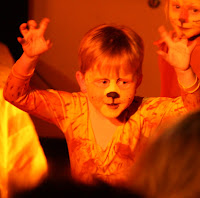 h Abigail and Sebastian performed in the St George's Dance recital last week and it was nothing short of spectacular. And I'm not just saying that because I'm a mother and I have to.

The story was about a girl who dreamed of all the animals in Africa. Sebastian was a fierce lion and remains the only boy doing ballet in the school. This production did feature four boys who have d

oing tap for several years and their dedication to the art was obvious!


Abigail was an elephant. For the ears, the costume department had made little sacks made from gray fabric with pink ribbons. When they put their ponytails into the sacks and tied them they looked just like elephant ears. It was adorable.

The music was su 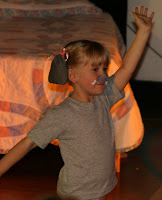 per cool and I saw many parents (including myself) getting down in the audience. The costumes and makeup were clever and creative.
Reception (Abigail's class) only performed in the first production and we went back to pick up an exhausted Sebastian quite late in the evening following the second production.
My heartfelt thanks go to Miss Maggie (the ballet teacher), Mrs Jones and the entire

production crew who must have worked hours and hours to make this such a special evening for parents and pupils.
Posted by LaDawn at 10:49 am

It's so fun do watch your children dance when they are young. Emily and Sheila took dance. Ballet and tap. It was great fun. It makes a mommy proud!

Of course my grandchildren are just adorable..Seb is fierce looking and abbey is just adorable as an elephant.. Good job Love to all grandma wink

Please have Marc update and or put somethings on his Amazon acct. or his christmas pressies will be slim.. Mom Wolbrink