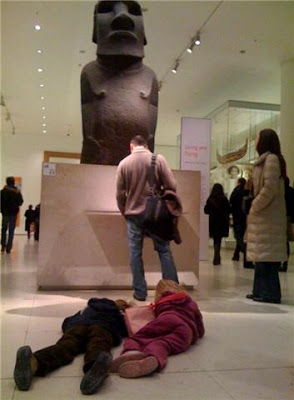 A few weeks ago during the school half term, Marc and I took the children to the British Museum. I'd heard all sorts of rumours that this was allegedly the best museum in the world and I wanted to be the judge of that myself.

I also have a fairly strong opinion about how the British came to have of this stuff to put in the museum. Basically, the Brits went round the world pillaging and plundering all the great civilisations in every corner of the globe and brought home the best bits. The British Museum was built for the express purpose of showing the world these ill gotten gains.

The defenders of the museum will tell you they've got paper work for it all. Yeah, right! And pigs fly.....I didn't want any part of that.

My curiosity (and the children nagging) got the better of me. With my morals well and truly compromised, we set off for the day.

We headed straight for The Hamlyn Library in the museum which has numerous sets of trails and challenges designed for various age groups and they are all free. They not only teach the children about many items in the museum but also how to navigate a museum and scrutinise historical objects. They learned how to translate Latin (always a useful skill?). They even got to handle some objects under the watchful but not too over protective eye of a museum volunteer. Abigail can tell you all about an alabaster pot which held kohl for Egyptian eye makeup.

We worshipped the stone statue lifted from Easter Island. Seb sketched the remains of a sculpture of a roman foot in a sandal. Abigail copied the names of the busts of the Greek gods. They thrilled a woman with their knowledge of the countries of Africa (and taught us a thing or two).

I stood in awe at the Rosetta stone as I gained a better understanding of just how incredibly valuable this piece of history was in helping us to uncover the mysteries of long forgotten languages and how this has led mankind to a greater capability in translating all different texts.

As the long day drew to an end and we had seen just about all we had the energy for, Marc reminded me that we still hadn't seen the Elgin marbles. Oh yeah.....I'd always wanted to see what all the fuss was about. The Brits took these marbles from Greece a couple hundred years ago at the height of their empire building. Of course, Greece was taking very good care of them before they were taken away since they were being used as a gun powder store. But I didn't understand what that all meant.

We walked into a room and on every wall was a stone sculpture. Marc started reading the exhibit in front of us. I patiently reminded him that we were at the end of the day and if we wanted to see the marbles we should probably get a move on. Marc looked at me like I had gone completely bonkers, an expression he has perfected over the years. I gently reminded him that our highest priority right at this moment were to see the marbles. Exasperated he pointed to the four walls surrounding us and said "See!"

Oh.....but I thought marbles were little round spherical things that little boys played with in a circle on the ground and carried around in little leather bags.

No, of course not. The sculptures were taken from the walls of The Parthenon. This article can tell you specifically what they are. And this link will show you some incredible photographs of these precious treasures. Just wished I'd looked at these before I'd made a right idiot out of myself.

No matter how these treasures were acquired, they are housed here with incredible care. The museum is free. The curators take care to ensure that everyone gets the most out of their visit: adults and children alike. Our school's half term was a week earlier than everyone else's so we practically had the museum to ourselves. The only disappointment was the tea in the cafe but I can overlook that.

The children got some fantastic certificates with their names on them for completing a couple of the challenges. Everyone is still laughing about my interpretation of the marbles. And I will definitely be going back to the British Museum. Sod the morals! And the marbles.
Posted by LaDawn at 6:10 am