You call that an airplane? 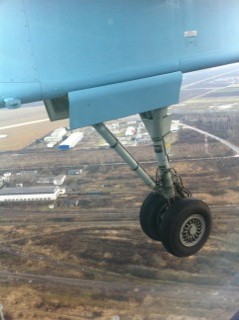 Kosice, Slovakia in January? I can hear you all snickering at me. What was I thinking?


First off, let me just say I had to go. For work. Really.

Ok, so the choice of date was all mine but that is partly due to massive scheduling conflicts over the last 6 months and there was a genuine fear that if I didn’t get out there now I might never get out there. And I needed to be here.

But where exactly is here?

Kosice is the 2nd largest city in Slovakia and is only the far eastern end of the country near the borders of Poland, Hungary, and Bulgaria.

To get here I flew Austrian Airlines from London, Heathrow to Vienna. Austrian Airlines deemed it acceptable on that leg of my journey to offer me a stale piece of neither sweet nor savoury nor fresh nor stale but rather just bland piece of white bread (although I use that term loosely). One bite was enough for me to decide I would work on my weight loss this week.

And then I walked off the plane. Trouble is I didn’t see a plane. OK, so there was there little tiny propeller type flying machine but this was most certainly not going to be the transportation I would be taking to Slovakia.

If you are new to my blog, you will be unfamiliar with my fear of flying which over the years has gone from bad to worse. I prefer to fly either dumb drunk or heavily sedated. Or perhaps both. This time I was neither and I was regretting that short sighted decision. Worse still, I was travelling with professional colleagues and trying desperately to hang on to any dignity I might have.

I started to tremble and sweat and was having trouble breathing. I merely walked away from my colleagues hoping they wouldn’t notice that the blood had drained from my face and I was struggling to climb the steps onto the aircraft.

By the time I got myself seated, I was in a full blown panic attack. I tried to count. I tried to meditate. I tapped my forehead. I pinched my ear. I tried to breathe deeply in through my nose and out through my mouth. I entertained the possible positive outcome of fainting and losing consciousness. I had lost the power of rational thought. The aircraft taxied for what seemed like miles and miles at which point tears were dripping down my cheeks. I realized a complete stranger was sitting in the seat next to me and he was just staring at me. I looked at him and attempted a smile and then assumed the crash brace position.

Before I my low humming turned to outright screaming we managed to get airborne. I counted to 100 and then I was fine. Now, do not go leaving me comments about how safe it is to fly in airplanes. I know that. If any of this was rational I could get over it by the sheer strength of the statistical evidence. I blame my father. And my husband. And my children.

I have always had a moderate fear of flying but nothing that a fear of flying course taken over 20 years ago helped me to conquer or at the very least submerge. But when I became a mother and my husband and I were flying with our first born child to the USA and I realized the responsibility and danger associated with taking this child on this dangerous flying flame thrower without his explicit permission was very inconsiderate. I then thought really that we should not all 3 be on the same flight together so that at least 2 of us would survive in case of a catastrophic nose drive. Then I thought no I would prefer that all of us go at the same time so no one was left behind. I tried to warn you that none of this was a shining moment of clarity.

My husband makes the entire situation worse. You see, he loves flying. He really wanted to be a pilot when he grew up. Hell, he still wants to be a pilot. He loves watching the Air Crash Investigations on the Discovery channel, especially the night before I have to travel on my own.

My father has always been afraid of flying and I always used to make fun of him. Every single reply he’s ever given me, I now use. Don’t tell him that.

Luckily, the flight was long and after an hour or so we began our descent. I looked out the window and saw the landing gear go down. Actually I saw one small tire. And the panic returned and the whole scenario played itself out all over again although in a much shorter time span. I never noticed before how much more quickly you land than take off. I’ll bet the passenger next to me was grateful for this small mercy as well.

My communist bloc adventure had begun.
Posted by LaDawn at 5:24 pm

Slovakia borders to Bulgaria? I wish...:)