OK, so I didn't run exactly like the wind but I ran. And I completed the race without needing to stop to catch my breath, collapse or flag for oxygen, first aid or rescue.

2 years ago I participated but walked about 1 mile of it and I was considerably heavier. I had done some regular training in the 12 weeks leading up to the race but had never managed to do even closest to the full distance in a training run. I finished but was VERY slow. Embarrassingly slow.

Last year the race was cancelled due to the foot and mouth infection for which I personally breathed a sign of relief. I had done NO training. And I was even heavier than I was the year before. I don't think I would have survived.

When I started the weight loss journey in March I set myself a goal of finishing the 8k this year and improving on my time in 2006. Shouldn't be all that hard, right? I'd be 50 pounds (or so) lighter and I would have months and months to train.

I lost the weight and diligently trained. Right up until the school summer holidays started. I woke up this morning with a knot in the pit of my stomach as I faced the reality of not having done any running since 18 July. However, I had done several runs that were nearly the same distance I was about to do.

As you can see I started off the run with a broad grin full of optimism and hope. I finished the run looking decidedly worse for the wear. It took every ounce of determination I have ever had in my body to get me round the course.

But I did it. I didn't walk any of it (although my pace was slower than some walkers at times but we won't talk about that). I don't have the official race results yet so am not dead positive about my time but I was carrying my own stop watch and I am sure I improved on my time from 2006. In fact I reckon I improved on it by over 20 minutes. I missed my goal of finishing within 60 minutes but not by much. 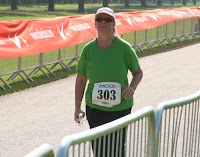 Sebastian and Abigail were waiting for me just before the finish line. They both breached the barriers and ran towards the finish line with me. As we neared the end Seb told me to run, run as fast as you can, run like the wind. And so I broke into a sprint. And nearly collapsed once I had crossed the line.
I can do better next time and there will be a next time; when my very large blisters are healed, when I can get up off the sofa and resume normal walking speed, when I don't moan when I sneeze, cough, go wee; when September rolls around again.
Posted by LaDawn at 7:51 pm

CONGRATULATIONS LADAWN!!!!!!!!!!!!! YOU ARE SUCH AN INSPIRATION! I don't think I could ever do that. I have tried running but always give up.You are awesome!

LaDawn, I am so proud of you. You showed such determination and grace. Never the easy way. You go! Clare