Just like in the Harry Potter novels, Sebastian's school is divided into houses: Victory, Revenge, Vindictive and Rodney. Yeah, not sure I get Rodney either but I have it on good authority that the houses are named after battleships. Never heard of Rodney but that's just the way it is.

Sebastian is a member of Victory. Not entirely sure how they decide on which house which pupil gets in but I am fairly certain it is not a magic hat. 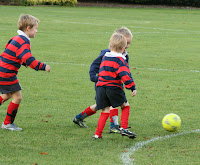 ad an interschool football (soccer) match. This meant that the various years played each other and won games for their house. Since Sebastian is on the C team this may be one of the few times/year he actually gets to play a real match.

The good news is Victory was victorious and took 2nd place. Those darn Revenge pupils took first but that is merely a temporary setback.
Posted by LaDawn at 6:47 am