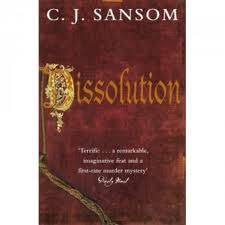 The first novel in the Master Shardlake work is a masterpiece in transporting the reader back in time to the sights, the smells, the sounds, but most importantly the feel of the reign of Henry VIII as he dissolves the monasteries across England. The novel is steeped in rich historical details and the plot carries you along without ever once losing your attention.

Master Shardlake is one of the most wonderful creations of historical crime fiction I have ever come across. He is a hunchback but the author doesn’t stoop to the carnival clichés and for large parts of the book you forget he is disfigured much like you imagine he forgets about his obvious physical deformity until someone else notices it.

The setting of a monastery on the Sussex coast in Scarnsea is brilliantly executed right down to the lighting and the echoes of footsteps. It did make me think how he knew what a disintegrating monastery would sound like. I particularly liked the descriptions of the journeys back and forth to London by horseback in the mud with driving rain and the state those travels must have left their clothes in.

The plot and pacing are perfect. I found myself unwilling to stop until I finished a chapter and before I knew it I had started another chapter. I read this book whilst we were on our summer holidays in Cornwall and many a cold night was spent curled up in the sleeping bag reading with only the light of my headlamp.

The second novel in the series, Dark Fire, is also quite good but not as good as the first in my opinion. I found the plot device of a ancient weapon of mass destruction from the time of the great Byzantine empire unearthed by a couple of bumbling idiots in Tudor London to be improbable if not impossible. I also felt this novel didn’t have the cut and thrust of the previous one. It plodded.

I really liked the subplot of Elizabeth, a young girl refusing to defend herself against the accusation of murdering her cousin. I felt this was a stronger plot and everything else detracted it. I finished the novel only to find out what happened to Elizabeth.

One of Shardlake’s sidekicks, Malton, whom he befriends at the monastery in the first novel, takes a much more active role and is developed more fully. Malton is a former monk with Moorish parents who fled Spain. Shardlake “rescued” him from the homelessness he would surely have suffered from the dissolution of the monastery in the first novel. Malton is a complex individual fighting the prejudice of the day but also exposing all those things which Shardlake doesn't know.

Both books capture the uncertainty and confusion that the people of England must have felt as their great and good King floundered in his many attempts to produce an heir. He was like a desperate, lovesick teenager flip flopping between women. Unlike the dalliances of our politicians of today, those whims had a profound impact on his image as the head of the church, the defender of the faith, and the one who declared the pope irrelevant. England was in chaos with every new wife.

Both books are clearly meticulously researched and with some more attention to editing, I reckon the remaining 3 books in the series will be as captivating, which is exactly why I’ve bought them on iBooks.
Posted by LaDawn at 7:10 pm

I came across your blog today.
Ann
Cozy In Texas