The Last Kestrel by Jill McGivering 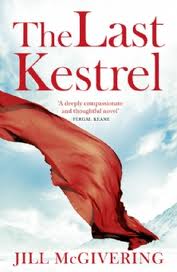 I remember watching the liberation of Kuwait during the first Gulf War on television when I was finishing university.  I was mesmerised by the footage of Christine Amanpour as she reported front the ever-changing frontline of the battlefields of Bosnia.  I have recently been shocked by the courage of the reporters from the uprisings across the Middle East over the last year.  I have seen footage of the reporters embedded with troops in the Vietnam conflict.  Reporters give us what we hope are the facts as the destruction of bombs and bullets unfolds before our eyes.

The notion of reporters embedded with troops isn’t a new idea.  Newspapers have sent reporters to cover wars since the time of the Crimea.  But what the reporters sent back wasn’t always aligned with the reality of the devastation.  They went where the military wanted them to go and they reported the message that the government wanted them to report.  Often the copy written represented very little of the actual blood and guts that is real armed conflict.  Civilian casualties were all too often erased from the words.


All too often, we take these reports for granted.  This book makes you live the war.


Jill McGivering, a respected, veteran BBC correspondent has covered more than her fair share of wars.  She is the currently the Asian correspondent and spend most of her time in dangerous places which aren’t really topping the top 10 places to go on holiday.  That’s because these aren’t the types of places you go for a nice, relaxing, hang out by the pool kind of holiday.


No, there is no hanging about when life is a fragile set of circumstances.  McGivering has taken these experiences, but more importantly, the people she has met, and written her first novel, The Last Kestrel.  Published in 2010, this book has only just made it to the top of my To Read pile.  I wish I had read it sooner.


The Last Kestrel tells the story of a journalist, Ellen Thomas, trying to unravel the puzzling events of her translator’s death, whilst assuring her publisher in the UK that a story will soon be submitted.  Ellen isn’t entirely certain what the actual story is.  Readers are invited to bear tragic witness to the story of Hasina, a native peasant woman, trying to save the life of her only son, who may or may not be responsible for a suicide bombing and the brutal realities of the unpleasant choices faced by the military caught up in the nightmare of today’s Afghanistan.


Undoubtedly, McGivering’s journalistic experiences have coloured the people and events and the book sometimes read like a newspaper report:  very factual, very straightforward, sometimes harsh, a little bit simple.  But then a surprisingly intimate and compassionate insight into the pain of Hasina, the mother of a martyr, will suddenly break your heart and remind you that you are a mother and everyone was once a foolish, impressionable teenager with ideals and convictions of right and wrong.

McGivering is also an obvious expert on the subject matter.  I was mesmerised by her descriptions of the social rituals and customs of eating food and being offered drinks in a home of a “local” Afghan.


McGivering has written a second novel, this one set in Pakistan.  The journalist, Ellen Thomas is featured again so I am betting a series is in the making.  I am happy to read them all if they are as good as The Last Kestrel.
Posted by LaDawn at 12:54 pm