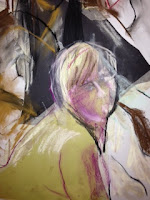 During the first workshop, Lucy at Spirited Bodies announced that the Daily Mail (a UK national paper) would be doing a feature on the event for their Sunday magazine, You.  They were wondering if there were any models who would be willing to be interviewed.  I put my head down.

As the workshop finished, I had decided that there wasn't really a downside to being identified by name in the article so I had agreed.  Spirited Bodies was very grateful.

The day before the event I sat at my desk doing the things which I do at my desk (which resembles writing but involves quite a bit of internet surfing) and the phone rang from a number I didn't recognise.  I don't normally answer those calls.  But I was feeling frisky.

The caller identified herself as a journalist from the paper and very politely proceeded to ask me questions for the next 30 minutes or so.  Most of the questions were around my motivation for agreeing to pose nude.  I waffled on for a bit hoping those reasons would sound clearer when I said them out loud than when I said them to myself.  I was slightly comforted by the news that the journalist would also be posing nude so she didn't want to derail the story too much and make it all seedy.

When I hung up the phone, I felt my heart start to palpitate.  I started to sweat.  I felt committed.  No longer would I be able to use a lousy sore throat as an excuse to throw this opportunity into the gutter.  Now I had to go.  I was soooooo nervous I thought I would vomit.

The entire evening I struggled to sit still.  Surreptitiously, I tried out poses sitting on the sofa hoping that my husband wouldn't notice that his wife was developing a passion for dramatic seating, standing, kneeling, and sprawling positions for watching television.

I woke up early Saturday morning, showered, and stared at myself naked in the mirror.  normally I avoid this sight at all costs.  But I couldn't avoid it anymore.  I did my hair but not too much.  I did a bit of makeup.  But not too much.  I dressed in something easy to take off, stuffed my dressing gown in my bag and set off for London with a large cup of coffee.

I arrived in plenty of time and watched the models arrive one by one.  It would seem nude modelling isn't something you do with friends although there were a few couples together.  We all recognised a couple familiar faces from the workshops in the crowd so could chat idly waiting for our big moment.

After what seemed like forever, we were told it was time to get changed.  As discreetly as possible we all stripped off and donned our dressing gowns.  It felt odd to be getting undressed in front of strangers but no one seemed to be caring so I tried to keep my eyes down and preserve my dignity until the very last moment.
We then all walked into the room, approached the stage, dropped our coverings, stepped on to the platform and struck a pose.  And that was that.  I was modelling nude for a group of over 70 artists.
You couldn't really tell who was drawing you.  Vanity took over and I wanted to make sure that I posed in a way that the artist would find interesting and would be compelled to draw me.  Me!  Me!
The room was silent but for the scratching of pens, pencils, brushes, charcoal on paper.  Models moved about on the stage and changed position.  Artists' gazes shifted from one model to another; from one group of models to another.  Before I knew what happened the first half of the day was over.
We were afforded a short break for lunch.  We nibbled on lentil salad whilst milling about in our dressing gowns as if this was the most normal thing in the world.  Some models left and new models arrived.  Then we did it all over again.
You could feel the anticipation of the end of the day approaching as the efforts of the artists become a bit more frenetic as the scurried about trying to finish a few pieces to hang on the walls.
As I got dressed I was somewhat stunned by what I had just done and a wee bit apprehensive about the art I was going to view.  What would I think of myself when I recognised my body?  What if I didn't recognise my body?  What if no one found my body interesting enough or attractive enough to draw?
The models and artists met up in the great hall.  I felt overwhelming pride when I spotted myself in a the pieces of art.  I had some artists tell me that my body, yes, my body, was beautiful.  I was astonished at how beautiful I felt despite my bumps and rolls and bulges and droops and sags.
I was a piece of art.  I was several pieces of art!  Beautiful wonderful art.
I got into my car.  I took a deep breath.  I put my head into my hands and had a good cry.  I felt so emotional at having had strangers tell me how beautiful I was when every other way I turn tells me that I am not beautiful.  let's face it, women my size struggle to even buy clothing.
And then I had a good laugh.  I laughed at the adventures still ahead of me.  And hopefully, many of those adventures will include the opportunity to do some more nude modelling.  I've added it to my long list of job titles.  And watch out for the feature in You magazine sometime in December!
Posted by LaDawn at 8:00 am

A DE friend in Canada! said...

You are amazing and so incredibly brave. Thank you for showing us what can be accomplished when you put your fears aside and start doing things for yourself. You have been officially added to my "people I aspire to be like" list.


You looked fab on the day,my memory of the day is your smiling face at the end!

Hell, yes, Girl!! Everybody has body issues Everybody. I admire your plucky spirit, LaDawn, always have. What a hurdle you leaped. Remember that triumph, and believe in yourself as you conquer new challenges and adventures. So proud of you!

Thanks for your comments. My memory of the day was my smile too!