I was giving my brain a rest from the trauma of The Quincunx and I think I've strayed into a brain coma.  This is, however, not an entirely bad thing.

I've never read anything by Rebecca Chance depsite her having written and published no less than six books, all featuring a CFM shoe (ask your parents if you don't know what CFM is)  and sparkly jewelery on the cover.  I picked up this copy at the blogging event that Simon & Schuster hosted a month or so ago.  And, hey, it was free.  Oh, and it was loads of fun.
This is truly a bonk fest book.  Loads of sex.  Did I meantion it had loads of sex?  Loads!  Hot sex.
The story is actually quite funny and entertaining.  The endings are all happy and joyful.  And to pur the icing on the cake, it even takes place during the Christmas festive season in London featuring caricatures of all our favourtie Daily Mail characters. 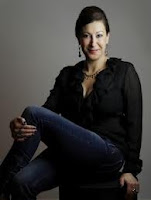 Melody is an up and coming actress who has spoint her chances of being a serious actress when Hollywood calls and transofrms her into a plastic surgery parody of herself.  Jon is a former CIA agent turned professional assassin trying to start his life over by erasing all traces of his former self including a whole new face using reconstructive surgery.  Aniela is the nurse in residence trying to care for both of them whilst falling head over heels in lust with Jon.  Grigor is an exiled Russian oligarch, who also owns a London-based football team but in deep trouble when he leaves his first wife for a young bimbo. Hell hath no fury like a Russian oligarch's first wife. Andy is the gay concierge at Limehouse Reach, a swanky apartment complex on the banks of the Thames, where all these lives collide for fun and festive frolics.  Oh, and lots of bonking.
This is a "curl up in front of the fire with a big duvt and get lost without having to think for one minute" or perhaps a "sit on a sun lounger and get fried" type of book.  I laughed out loud more times than I would like to admit.  And enjoyed it more than I would like to admit.
For sex scenes much better than Fifty Shades, you should really be reading Rebecca Chance!
Posted by LaDawn at 8:00 am