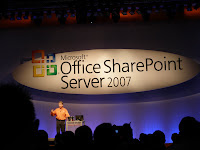 I had very high hopes. I had never been to a Microsoft conference but had a great deal of hope and high expectations. maybe this is where I went wrong.

I attended the Gartner ITSymposium Expo in Cannes, France in November 2006 and this was easily one of the best (if not THE best conference I've ever attended so maybe my expectations were unfairly high). I now compare conferences to the gold standard. this was not it.

You judge for yourself:

I picked up some little nuggets of useful information from various sessions in the conference. I got to see what Sharepoint 2007 looks like. There were some extremely knowledgeable Microsoft professionals on site who were willing to discuss at length the answers to any questions. I could have gotten the value of 10 (above) by going to the Microsoft campus in Reading, just 20 miles down the road from me.

The language thing doesn't really bother me. Although I almost wrote that if we had been in France it would have all been French but that wasn't true at the Gartner conference or a Project Management conference I attended in Paris some years ago or so.