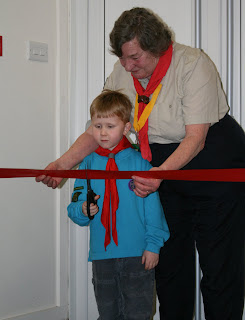 Sebastian was an honoured VIP at the grand opening of the local Scout's Headquarters last night.
It seems the hut (as it was previously known) was in a bit of a state of disrepair and had undergone a comprehensive refurbishment last summer with the help of local businesses. Last night was a ribbon cutting ceremony where all the people who had donated time, materials and money were thanked.
Sebastian was identified as the youngest scout and and along with the oldest scout he was asked to do the honours of cutting the ribbon and unveiling a plaque.
I was so proud of him. He took his duties quite seriously and posed for photos in front of the local paparrazzi like a superstar. I was just amazed no one asked for his autograph!
Posted by LaDawn at 8:22 am

Good job sebastian. You really look important. Maybe when we meet in July, you can autograph one of my golf caps.
Sue