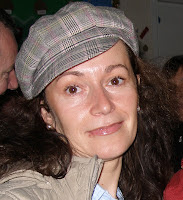 Last night was a Ladies Night Out to say goodbye to Monica who is moving to Germany. Monica and her family lived 2 doors down from us when we lived in Windsor. Her little boy, Lorenzo was just 4 months old when we moved in and I was pregnant with Sebastian. Monica and her family moved to another part of Windsor not long after we moved in and we lost touch. We ran into each other a few years later only to realise that our sons would be going to the same school and they even ended up in the same class. Lorenzo, who is not such a little boy anymore, and Sebastian are great friends and play dates were frequent. Lorenzo will be missed and Sebastian is already missing him. Monica and her family will be missed but we hope to stay in touch. I have a business trip to Berlin in February so will get to see her then. The Ladies Night Out was fun and I met loads of Monica's friends. We had a great time although I did pass on the nightclubbing! Best of luck to Monica and her family as they make this change!
Posted by LaDawn at 10:22 am

it's Auf Weidersehen - see you later.

You didn't mention, is Monica German?

Parties are always tenuous times. But I'll guess that everyone had a great time.

Sorry about the german spelling mistakes. I could lie and say they were typos. I will however confess that my german is a bit rusty since I haven't lived in Germany for over 15 years. Will try harder for improve my linguistic forays.

Monica is not German. Monica is Italian.

Identify yourself.....anonymity is not fun!