Nicknames are terms of endearment and whilst some nicknames may not be affectionate, most are.
Pretty much everyone in my family has a nickname. My sister was known for years as Snarfy much to her dismay. My dad is still to this day called Smitty by all of his friends and acquaintances. He even introduces himself as Smitty. My brother George was called Yorty Chong. No one is really very certain about the origins of these names. They just seem to have always been. My grandfather, Pop, was a big fan of nicknames and seemed to give one to everyone. I have a cousin who we called Buddy and I think I was in my 20s before I realised this wasn't his real name. He was actually named Glen. My cousin, Chris, is still referred to as Earl. My father and his brothers call each other Poop. This can get a bit confusing at family gatherings but they always seem to know who is speaking to whom.
My father still calls me Plum. He has since I was a wee little girl. He used to address my mail to Plum Smith, even mail that went to my office, which was a source of endless colleague teasing until I changed jobs and went elsewhere. My cards come addressed to Plum. I have some family members who are not quite sure what my real name is and at my family reunions nobody knows who LaDawn is. It used to bother me but now I quite like it. Last night my husband called me Plum. 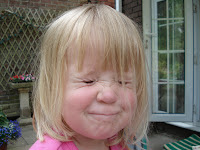 My daughter, Abigail, seems to have developed the same affinity for nicknames. She started calling Sebastian Shake about a year ago. The name has stuck and I find myself yelling through the house "Shaaaaaaaaake!" Even the children at his school have started calling him Shake. Abigail also named her Uncle Matthew Mouse which just seems to fit. They've had a special bond since she was a baby. I hope he doesn't mind (I think he quite likes it). She calls her godfather, Simon, Shisam which is very odd indeed. Not entirely sure where she got this but Simon must sound something like Shisam in her head. Odd thing is even though her speech is improving as she gets older, the nicknames remain. She must be consciously carrying on a tradition handed down from her grandfather and great-grandfather. Good girl!
What are your nicknames?
Posted by LaDawn at 4:35 pm

i like how you end your postings with a question. gets me thinking better.
maybe Abby thinks her brother is a 'Sheik'? probably not, tho. he doesn't look Arab, does he?
when i was in high school, friends started calling me janell-o which got shortened to jell-o. i sometimes miss my old friends, but i don't miss that nickname.
one of my first nieces couldn't pronounce my name, so she called me Nell. i liked that one, but it disappeared when everyone got old enough to get their tongues around janell.
my grandma's name was Agnes, but granddad always called her Peggy. i learned years later that Peggy is a traditional Irish nickname for Agnes.
loveya
janell

You should write about a story/poem about nicknames on your blog.

I used the name CyberScribe on my blog and people shortened it to Cybez Maybe it could be a sort of double nickname.
I found it amusing when I was younger and attended a local church where my father was an elder. I'd a nickname I was called there by other young people and years later had been told by some of the church members that they thought there were two different people.So the more mature members of the church didn't know my nickname and the younger ones did. So when the younger people were talking about me using my nickname the parents didn't realise who exactly I was.

A few more family nicknames -
My younger brother called my older brother John 'Ollie' for years (ask him about it).
Matthew was 'Plum' till he was about 12 when He asked that we drop it (Ben called him 'Pum').
Ben was 'Pigpen' abbreviated to 'Piggie', again till he was too grown up for it.
My Mum was 'Girlie' to her Scottish family from childhood(even Auntie Girlie to her neices and nephews) due to her being the youngest of 4 children.
And Paul my younger brother was called 'Gavin' ('Gav') all his life by our Dad 'FB'.