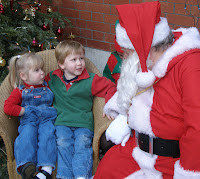 Yesterday the children had breakfast with Santa. OK, so he didn't actually eat with us, more like we went and gave him our lists after we ate out breakfast. This was the very first time that Sebastian even came close to the old bearded man. In previous years he would scream blue murder if we asked him to get anywhere near the jolly old elf. Yesterday, he was quite happy to jump up next to him and hand him a rather long list (that he had typed up on the computer!). Abigail was a little shy and only went up because he big brother did. She stuck to him like glue and didn't want to say much at first. But then she got right into the whole spirit of the season. When Santa asked Abigail what she would like him to bring, she replied "TOYS!". Now those are expectations which can be met!

A quick tour round the toy shops to make sure the elves had delivered aforementioned list items, we finished off our Christmas shopping. Abigial & Sebastian certainly got into the swing of the whole shopping thing and really like visiting Hawkins Bazaar in Windsor which has loads of toys & trinkets and things you didn't even know you needed or wanted. This kept them entertained for quite some time.

Off we went to the supermarket to pick up some nibbles for our "Manor Cottages" Christmas doo planned for that evening. For those of you who are unfamiliar with where we live, we are number 3 in a terrace of 4 cottages built in the middle of some fields sometime in the late 1890s. We have the results of the 1905 census and the houses are certainly there then. To the back of us is the crown estate (ie Queen Elizabeth owns it and it is part of the ground of Windsor Castle). to the front of us is English Heritage preservation land (it is believed that the first Windsor Castle (pre 1077) was built near here. It is currently used as horse pasture and is owned by some people who live down the road. What is means is that the 4 families living in these cottages are close. We have only each other for neighbours. Gill lives alone in number 4. Simon & Emma live in number 2 with their infant (3 mo) daughter, Helena. The Gilmour family live at number 1 with 2 of their 3 children, Ross & Harry. Hayley has recently moved out with her boyfriend, Nathan, and their infant son, Tristan.

Gill made some great mulled wine and put on a fabulous feast. We provided the sushi

platters, Si & Emma provided some cheese. Jill made a fabulous looking dessert although it must be said I don't remember eating any of it!

get together for some drinks and nibbles and exchange Christmas gifts and play some fairly competitive games, eg Pictionary. Gills grandchildren, twins Jemma & Tom, joined our festivities. Tom & Gill won the wicked game of Pictionary with a particularly good guess of Tom's producing "pole".
Posted by LaDawn at 9:34 am