This time of year is so full of joy: reading wishful Christmas lists, seeing children's faces light up at the magic of Christmas tree lights, hearing sweet little voices sing We Wish You a Merry Christmas or Rudolph of the Red-Nosed Reindeer, witnessing my husband struggle through the gift selection process.

My childhood memories of Christmas are so vivid. Growing up, my family was big on tradition and everyone year you knew what fun the holiday held. On Christmas Eve we would go to Nanny's house and gather all my uncles, aunts, and cousins. In later years the house swelled under the weight of her great grandchildren and on more than one occasion a few non-blood members joined our motley crue when they had no where else to go but they couldn't have been in for more of a treat. The gathering was never at a set time and throughout the afternoon people would arrive (usually depending on how much last minute gift shopping needed to be done). The tree was in the basement (year round in later years - just covered up with a sheet when it was not December as it was a bit much for Nanny to put it up and take it down as she grew a bit older). Nothing else was too much for her. She worked very hard to make sure we had a special night with her.

Everyone else pitched in making the various nibbles for grazing: cream cheese/jalapeno filled tortilla rolls, veg with dip, crisps/chips, cold cuts/cheeses. But no one filled up too much for the grand prize was a bowl (or two or three) of her amazing Oyster Stew. Now, many had married into the family and not all partook of the delicacy (she offered chili for the non-oyster fans) but it was an event not to be missed. Once all the eating was done, all the dishes had to be done before we could descend the steps and start the decimation of the wrapping paper. You've never seen a kitchen cleaned so fast. Even the men picked up a dish towel now and again. 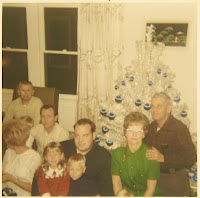 No one really paid all that much attention to what they received themselves (although Steph's nipple warmers were one gift that really stood out). The most joy was derived from watching Nanny open the presents given to her by her children, grandchildren and great-grandchildren. It didn't matter how big or small she showed the same tearful eyes as she passed out her ever gracious thanks. I'll never forget the year she received a television from each of her sons - 3 televisions. She was just as happy with the third one as she was with the first one.

For dessert there was rice pudding with the hidden almond which it seems my dad always found but I think he probably cheated - not sure how. And then the popcorn balls! Oh my gosh, what I wouldn't give right now for one of those popcorn balls. She made them in red or green and they were just the perfect consistency. I'm afraid this tradition has left us when my Nanny left us. She tried to teach my sister how to make them and god knows, I watched her make them dozens of times but can we get them anywhere near as good as hers? Heck!
She always had a great selection of Christmas candy that she had made herself in the months leading up to the holiday season. Dishes of sweet treats would be strategically placed around the house to tempt you at just the right moment. You'd pop it into your mouth and moan with the pleasure of all that care and attention given to her family. She made every one's favourite every year but wasn't afraid to try new recipes out now and again.
I miss my Nanny so much this time for year. There was seldom a question for which she didn't have an answer.....maybe not the answer you hoped for but an answer nonetheless. One year my husband (newly married) requested a recipe on how to do Prime Rib. Arriving in the post a week later was a how-to on everything prime rib. She'd written a bit herself that explained how she did it but she had also included newspaper and magazine article cut outs. My husband now cooks a mean Prime Rib every Christmas after reviewing everything she sent us. I see her hand writing and it brings tears to my eyes. I can't ring her telephone anymore for a refresher on how to make this or that or how to fix this or that or what I should say/do about this or that. And I don't get to see her face light up when she opens my pressie anymore.
Every year on the drive home from Nanny's house to our own home we would listen to the car radio for the local update on Santa's progress delivering his packages to all the deserving children. Technology has progressed and instead of tuning in the radio my family here in the UK pull the NORAD page up on the web and watch Santa's progress across the skies of the world . I watched my children's amazement last year as I saw the belief in Santa grow. Some traditions die, some change and some live on just the way they were.
PS Happy 3rd Birthday Abigial!!!!!!!
Posted by LaDawn at 10:41 am

Merry Christmas to all.