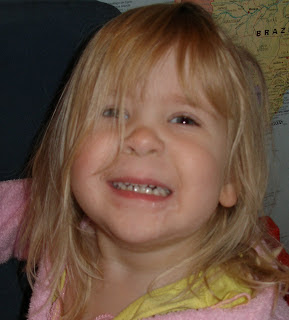 Three years ago today I was laying on an osteopath table who was trying to ensure that the little baby girl inside me was pointing in the right direction (head down) in preparation for her arrival sometime in mid-late January. The Christmas shopping was all done and I had just finished the grocery shopping which had been dutifully stored in the fridge at home. I was all ready for the holiday and would worry about the birth of our 2nd child after the new year. I still needed to get the cot down from the attic, wash the hand-me-down baby clothes, and get nappies. But I had lots of time and wasn't as prepared for the 2nd as I had been with my first.

In advance of Sebastian's birth, we had nappies galore, the cot had been set up when I was only 6 months pregnant, and the clothes were stacked clean in little baskets according to size and colour. My hospital bag was packed at 7 months and I checked and rechecked the contents daily. My mother had arrived 4 weeks before my delivery date and we sat in the garden in the unusual sweltering heat of May in England. Seb arrived in the world just a few days prior to his scheduled date of arrival and not a moment too soon.

Hence my rather relaxed attitude towards Abigail's arrival. So there I was having my shoulder massaged when I realised that water was gushing from my nethers (ok not some much gushing as dripping - like when you barely turn on a faucet). I announced with some embarrassment that either my waters had broken or I had peed all over the osteopath table. Luckily the osteo was rather experienced in these sorts of things having had 4 children of his own. He announced with a little too much excitement that he thought my waters had broken.

Now the brain goes into over drive......I knew from all those books I'd read and classes I'd attended that I would either go into labour on my own in the next 24 hours or they would have to go in and get her. "But it is 3 days before Christmas" I wailed. Prophetically, Marc's Uncle John has predicted month's before that this baby would arrive before 2004 was upon us and his son, Simon (who had been chosen as Abigail's godfather), was born on Christmas Eve.

Marc delivered me to the house where I raced around like a mad cow packing a hospital bag and barking orders at him to get baby things from the attic. We fell into bed that night certain that labour pains would awaken our sleep in the night. Imagine our surprise when we awoke the next morning and felt absolutely no grumblings. I was certain I had made a mistake and the moisture running down my legs was just one of those oddities of pregnancy that your mother (or any other woman) never tell you about because if they told you everything about pregnancy the human race would cease to procreate.

We had a pre-scheduled appointment at the hospital on 23rd December to check the position of Abigial since she had been transverse (sideways) since mid-pregnancy and the doctors wanted to check she had gotten herself in delivery position. She had, YEAH!!! Oh but wait, where has all the amniotic fluid gone? Hmmmm, I whispered, "I think my waters might have broken." "When?" the tech asked. Uh, "yesterday" I replied. Well, "you need to see the consultant" she instructed me. "When?" I asked. "Now" she commanded.

The consultant was very calm and assured me that if I thought my waters had broken yesterday but I still wasn't having contractions chances are I was mistaken. She said there was a test to confirm that either I was going to mad or I was going to have a baby. Much to the consultants surprise, I was right, I was going to have a baby NOW! You see, here in England, apparently, the patients are rarely right (or so the doctors think)! The test confirmed my waters had broken, I had very little fluid left and the baby needed to come out within the next 24 hours.

"But it is 2 days before Christmas" I wailed. They didn't care. I was handed my medical files and told to go to another hospital (do not pass go, do not collect $200) except to get my bags which I had optimistically left at home. Trouble was we had Sebastian. Not that he was any trouble. He'd sat with us through the scan and the test and was quite happily picking up all sorts of germs around the hospital. He wasn't going to be so happy for long. My mother wasn't due to arrive until mid-Jan. Marc's mum was on the Isle of Wight and we couldn't reach her by phone as she was working. We'd left numerous messages which she hadn't picked up yet. So the call went out to Uncle John and Auntie Mary who duly took Sebastian off with them.
I spent a rather tense night in the hospital coaching the young girl in the bed next to me through her labour pains. She was all alone and had never read a book or gone to delivery classes so she had no idea what was going on or what to expect. I could only imagine how scared she was (or maybe completely oblivious). I kept hoping that my contractions would start, like maybe if I got really close to her I could catch them (like a contagious disease). But my contractions never started.
Christmas Eve arrived. The doctor arrived. Then Abigail arrived. You see the whole c-section process is very quick and relatively painless. She was the most beautiful little girl in the whole world. I had no idea who had my son or where. But I had my daughter and she was an angel.
Abigail wasn't well and had a bit of grunting and some blood sugar problems. They rushed her off to the special care baby unit. The lowest depth of my misery in life was the night I had to leave her in the hospital. I thought someone had cut out my heart. We returned just 3 hours later to feed her but it seemed like a lifetime. She came home with us on 29 Dec 2003.

Marc's Christmas dinner was an out of date sandwich from a garage down the road from the hospital. Santa came late that year for Seb (and Abigail). Marc's mum arrived after Abigail did. My mother arrived in mid-Jan. All my grocery shopping went to waste and we had quite a mess to clean out of the fridge.

Abigail will be 3 on Christmas Eve. She is a wonderful little girl and very independent. She is a bit eccentric and walks to the beat of her own drummer (always carrying a handbag). She loves to dance and sing. She has a very creative imagination. She loves shoes! And we love her! I am so proud to be her mother
Posted by LaDawn at 2:00 pm

What a wonderful recount of her birth. Brought tears to my eyes!

Thanks for you comments, sis! You are the best (and most prolific commenter!)

Such a lovely story, one I'd never heard, having been gone from Europe mostly since Seb was born. Keep up the writing, LaDawn. It almost is like we're having a chat. Much love, Clare